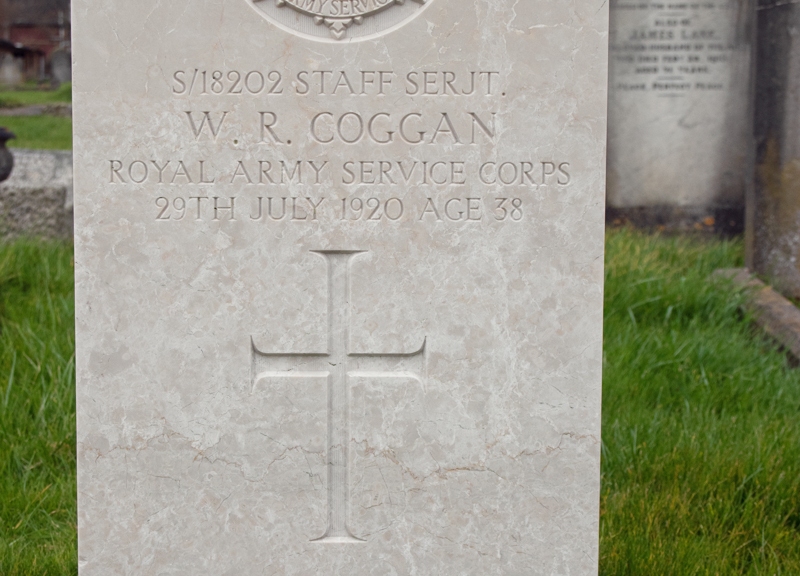 William Reginald Coggan was born in Twerton, near Bath, at the end of 1882. His father, also called William, was a railway guard, and with his mother, Annie, he would go on to raise nine children, six of them girls.

William Jr became known as Reginald, presumably to avoid confusion with his father. He didn’t follow his father onto the railways, but found a way to serve his country. In the 1901 census, he was working as a baker for the Army Service Corps, and was based at the Stanhope Lines Barracks in Aldershot (along with more than 1800 others).

Ten years later – by the time of the 1911 census – William had left the army but continued his trade. He was listed as a baker of confections in Glastonbury, was living above the bakery with his wife of four years. I have been able to find little information about his wife, Kate, other than that she came from Dublin.

William’s life becomes a little vague after the census. A newspaper report confirms that he had served in the South Africa war (1899-1902), and that he had seen five years’ service in France. The report – and William’s pension records – confirm that he had continued in the Army Service Corps, gaining the rank of Staff Sergeant.

William had died in Ireland, and his death registered in Fermoy, thirty miles to the north of Cork. The report confirmed that:

Nothing is yet known of how he came by his death, although a request was made for a post-mortem examination.

I can find no further information about his death and, unusually, his Pension Record gives the date, but not the cause. Staff Sergeant Coggan died on 29th July 1920, aged 38 years old.

William Reginald Coggan’s body was brought back to England for burial. He lies at rest in St John’s Cemetery in Bridgwater, Somerset.