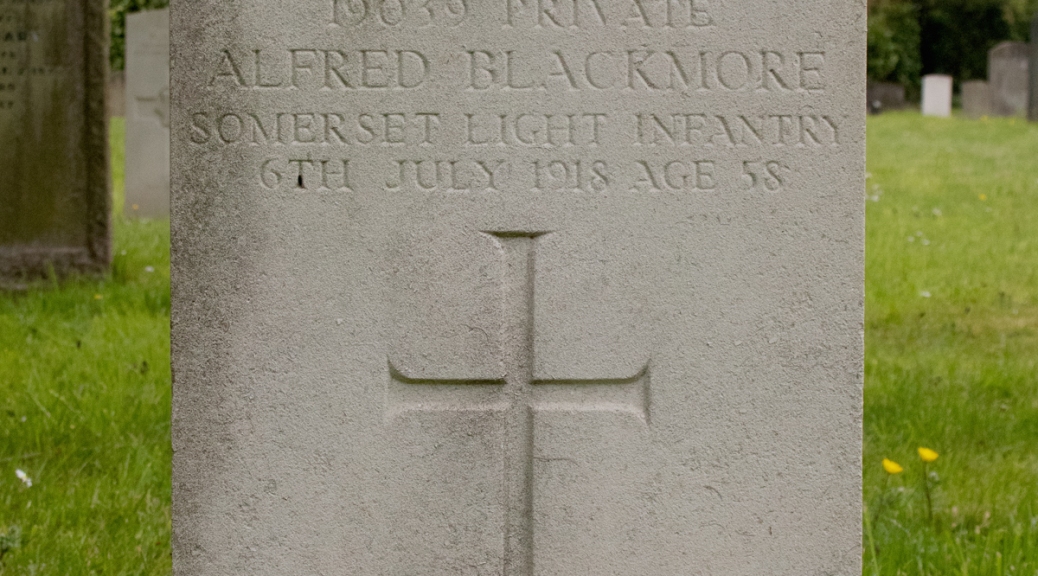 Alfred Blackmore was born on 25th October 1868 in the village of Thurlbear, near Taunton. Documentation varies and names cross over, but it appears that he was one numerous children to farm labourer William Blackmore and his wife, Mary Ann.

Details of Alfred’s early life are a bit hazy – again, in a rural location, names often cross over, so it is a challenge to totally confirm that they relate to the right person. His mother appears to have passed away by the time of the 1881 census, and Alfred was living with his father and three of his siblings and working as a farm hand.

Alfred again disappears off the radar for a while; in July 1894, he married Lucy Charlotte Yard, and the couple went on to have two daughters, Lucy and Beatrice. By 1901, the young family were living in the village of Frampton Cotterell, just to the north of Bristol, and Alfred had found employment as a marine fireman.

Ten years later, Lucy and the girls were still living in Frampton Cotterell, but Alfred was back in Taunton, lodging with a 75-year-old widow called Mary Croker and working as a labourer. This separation may have signalled the beginning of the end for the couple’s marriage.

War broke out, and it is evident that Alfred enlisted as a Private in the Somerset Light Infantry. Sadly, his service records are lost to time, but it appears that he served for at least three years.

The next time Alfred appears in documentation, it is a newspaper report on his passing, under the heading “Taunton Soldier’s Death”.

Mr F Foster Barham, coroner for West Somerset, held an inquest at the Blackbrook Inn, Ruishton, on Monday, relative to the death of Alfred Blackmore, aged 49, a private in the Labour Company at Taunton Barracks, whose body was found in the stream at Blackbrook on Saturday morning.

William Cozens, farmer… gave evidence of identification, and stated that on Friday he saw the deceased sitting by the hedge… about 400 yards from where the body was found.

William Richard Radnidge, butcher… stated that on Saturday morning he found the body in the stream dividing Ruishton from Taunton St Mary’s… His cap, belt and cape were on the bank. The deceased was lying face downward, his face and arms being in the mud below the surface.

PC Jenkins stated that at 10:45am on Saturday he received a communication from PC Wathen, in consequence of which he proceeded to Blackbrook, where he found the body lying under a hedge. He searched the body, and on it found a summons, returnable at Taunton on 29th June, for having failed to comply with a maintenance order obtained by his wife, Lucy Blackmore, on 25th September 1915, the sum of £2 13s [approx. £300 today] being due. On the back of the summons was written: “This is what my old cow has done for me.”

There was also the following letter: “When my body is found, don’t you give a farthing to my old cow. What I have got to come give to my brother, Edward Blackmore… Signed A Blackmore.” At the back of the letter was written: “Goodbye to all that I love.”

The deceased had left his lodging at nine a.m. on June 29th to attend the Taunton Police Court, but did not do so.

An officer stated that the deceased’s conduct during the three years he had been in the army had been satisfactory.

The Foreman of the jury said that according to the evidence they found that the deceased met with his death by drowning whilst temporarily insane.

Alfred Blackmore took his own life on 6th July 1918. He was 49 years old [the war grave gives a different age].