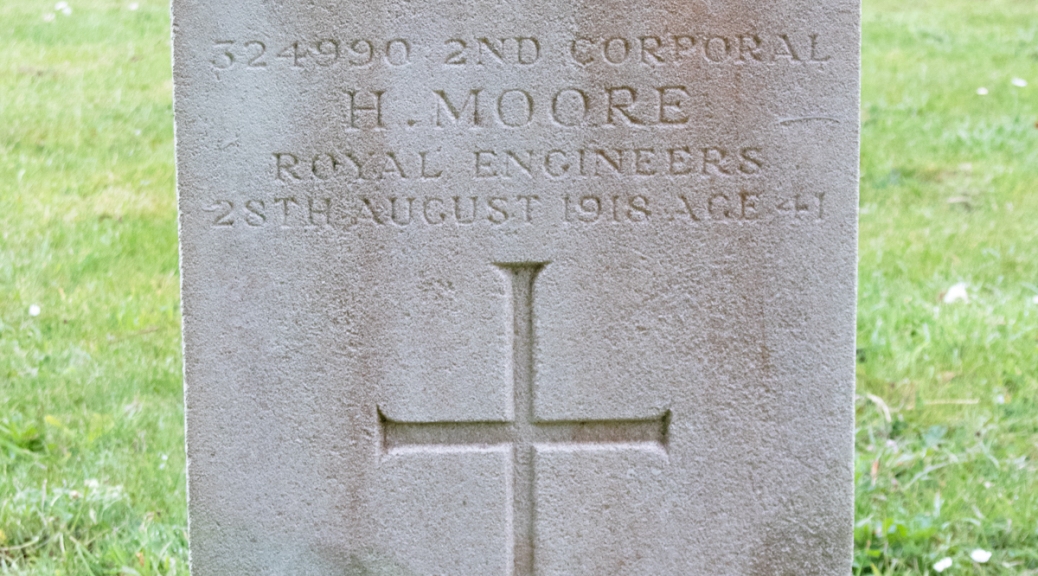 Harry Moore was born in Tiverton, Devon, in early 1877. He was the fourth of eleven children to James Moore, a railway policeman, and his wife Ann.

By 1890, James had moved the family to Taunton, in Somerset (where his work was now listed as railway porter). Over the next decade, Harry was to encounter tragedy and happiness.

In 1894, his father died from Bright’s disease (a kidney complaint), at the age of just 45 years old.

Three years later, Harry’s mother died, from what appears to have been heart failure. Ann was 49 years of age.

On 13th November 1898, Harry married Alice Mary Larcombe, a dressmaker from Taunton. The young couple set up home together in the north of the town. They went on to have five children, although, sadly, only one would live to reach their 20s.

By now Harry had found employment as an insurance agent, but war was coming to Europe. His military records are lost to time, but he enlisted in the Royal Engineers and was assigned to G Depot Company. (The Depot Battalions received men who had returned from the Expeditionary Force and also those men who had enlisted for Tunnelling Companies, Special Companies and other specialist units.)

The next evidence we have of Corporal Moore is in the Army Register of Soldiers’ Effects. This confirms that he had been admitted to the Southern General Hospital in Bristol with an illness, and that he subsequently passed away on 28th August 1918, at the age of 41.

Harry Moore was laid to rest in the St James’ Cemetery in his home town of Taunton.