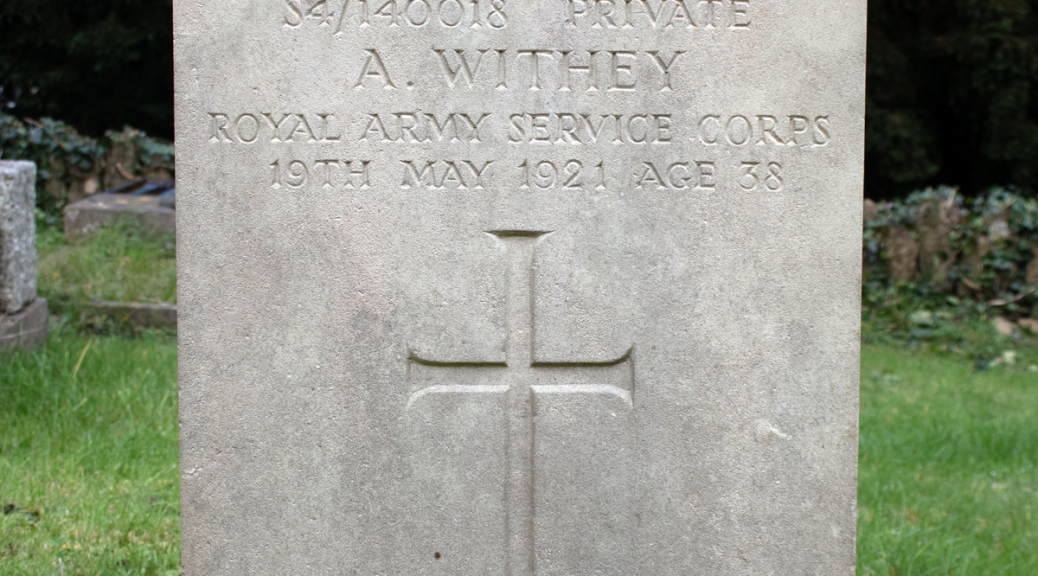 Albert Withey was born in Frome, Somerset in November 1882. One of ten children, his parents were John Withey, a coal dealer, and his wife Elizabeth. John passed away in 1891, Elizabeth eight years later, which led to Albert becoming an orphan while still in his teens.

Information on Albert’s early life is scarce and, indeed, his trail goes cold until 26th September 1915, when he enlisted in the Army Service Corps, as part of the war effort.

Private Withey’s service records give more insight into his life: he was 5ft 7ins (1.70m) tall, and had varicose veins on both legs. The document also confirms that he had married local woman Annie Louisa Stent on 2nd January 1912. Both attended Holy Trinity Church, and it is likely that this is where they met. Annie was the daughter of a local house painter, while Albert had become a baker; it is probable that it was this work that led him to be assigned to the ASC.

Within weeks of joining up, Private Withey was in Egypt, and it was here that he worked as part of the Supply Corps for the next four years. Albert remained in North Africa long after the Armistice was signed and, in fact, did not return to England until the August after the war had ended. He was officially demobbed on 30th September 1919.

At this point, Albert’s trail once again goes cold, and the next document relating to him is a short notice in the Somerset Standard, two years later, when, “at Pensions Hospital, Bath, Albert Withey, aged 38 years, [died] after a long and painful illness, patiently borne.” [Somerset Standard: Friday 27th May 1921]

Albert Withey was laid to rest in the graveyard of the church in which he was baptised and married, Holy Trinity Church, Frome.

Albert’s widow, Annie, was the sister of Bertie Stent, who had also died after coming home from war. Read his story here.