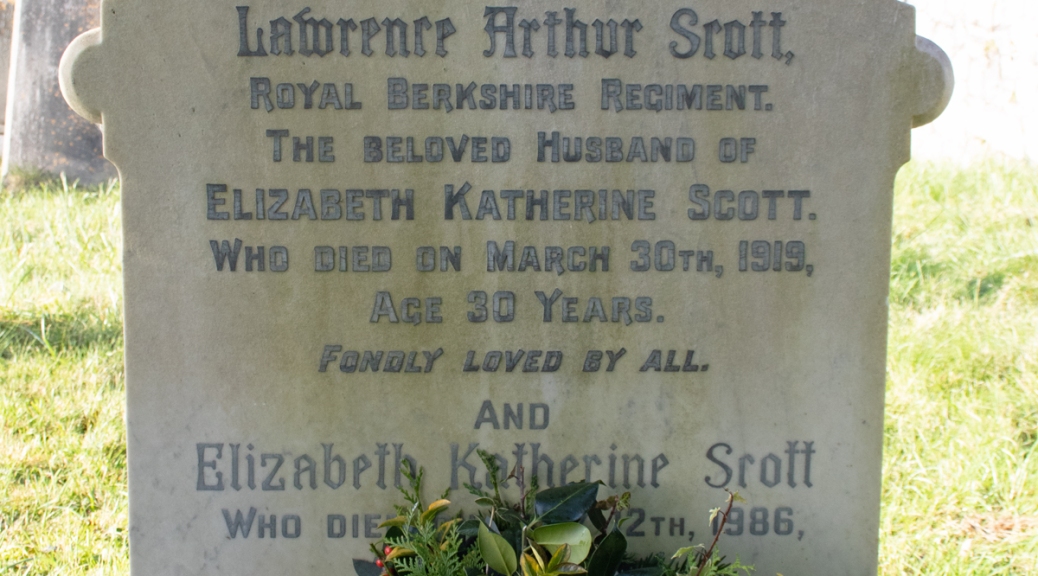 Lawrence Arthur Scott was born in the spring of 1889 in the Devon town of Kingsteignton. He was one of nine children to George and Louisa Scott. George was a lighterman – transporting clay and other goods on a barge. When his father passed away in 1905, Lawrence found work as a clay cutter, bringing in money to help support his mother. By the time of the 1911 census, he was on the only one of Louisa’s children to still be living at home, and was the main breadwinner.

In the spring of 1915, Lawrence married Elizabeth Webber in Newton Abbot. The young couple settled in Kingsteignton, and went on to have a son, Frederick, who was born the following year.

By now war had descended upon Europe. Lawrence enlisted, joining the Royal Berkshire Regiment in the summer of 1916. His service records confirm that he was 5ft 7in (1.7m) tall, had dark hair, blue eyes and a fair complexion.

Private Scott arrived in France on 20th August 1916 and, over the next couple of years he served on the Western Front. In September 1917, he was transferred to the Labour Corps, but by now his health was suffering. On 22nd March 1918 he was admitted to a hospital in Rouen with bronchitis. He was transferred to a hospital back in England and, on 17th June 1918 he was formally discharged from the army, with arteriosclerosis.

Lawrence returned home, but his health was to get the better of him. He passed away from heart failure on 30th March 1919, aged just 30 years old.

Lawrence Arthur Scott was laid to rest in a family plot in the graveyard of St Michael’s Church, Kingsteignton. Elizabeth was finally reunited with her husband 67 years later and was buried with him.