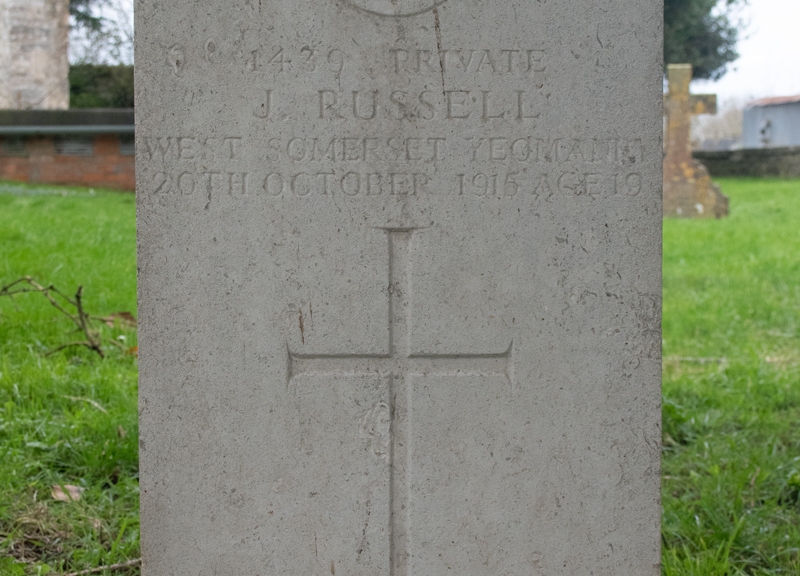 Born in September 1896, John Russell was one of thirteen children to Henry and Ellen Russell. Henry worked as a turf cutter on the Somerset levels, and the family lived in the village of Meare, near Glastonbury.

By the time of the 1911 census, John, aged 15, had left school and joined his father’s business.

When war broke out, John joined up; sadly, his military records are absent, but what we do know for certain is that he enlisted in the West Somerset Yeomanry, and was based at the Stanway Camp near Colchester in Essex.

Sadly, much is written of Private Russell’s death. He was acting as a sentry at the camp on the morning of Tuesday 19th October 1915 when he was hit by a car; taken to the military hospital in Colchester, he passed away the following morning.

An inquest was held into the incident, and the following was ascertained:

Vera Coysh, aged 19, was driving near the camp with two friends and her gardener; as she was approaching the entrance, a horse-drawn military wagon ahead of her turned and she swerved to avoid it. In doing so, she hit Private Russell “and carried him some way along the ground”.

John’s injuries were significant. When admitted to hospital, he “was suffering from bruises on the back of the head and haemorrhage from the right ear and nose. His left hand and the lower part of his left arm were swollen from bruising. He was semi-conscious and restless…”

The inquest identified some discrepancies in what happened.

Witnesses in the military wagon and a second one following it all saw a turning signal being given, although not necessarily in time for Vera to slow down or stop. All of the army witnesses stated that she was driving at a quick speed, possibly as much as 35mph.

The inquest was a lengthy one, but the final verdict was one of accidental death, with a recommendation that signs were put up on the road to warn of the entrance to the camp.

John Russell was just 19 years old when he died. He was laid to rest in the graveyard of the Church of the Blessed Virgin Mary and All Saints in his home village of Meare, Somerset.

It’s worth also having a look into the life of the driver of that fated motor car.

Vera Murdoch Coysh was born in September 1896, the eldest child of Commander William Henry Coysh and his wife Beatrice Murdoch. The family lived in Yorkshire and, by the time of the incident, William and Beatrice had had four other children – Humphrey Cecil (who became a Commander), Geoffrey Ernest (who went on to be Sub Lieutenant), John William and Barbara Daphne.

Three months after the accident, Vera married Second Lieutenant Trevor Davidson, of the Essex Regiment, and the couple soon emigrated to Mozambique.

All was not well, however, as, by 1924, Vera has moved back to England, the couple had divorced and she had remarried, to a Douglas Stuart-Jervis. The couple went on to have two children.

Meanwhile, Vera was also making a bit of a name for herself in the literary world, writing a number of novels under the name of Jane England. While rarely seen nowadays, she wrote books with such ‘pulp fiction’ titles as Red Earth, Romantic Stranger, Flowering Harvest, Stormy Passage and Winter Jasmine.

It’s bittersweet to see that Vera made a life for herself, in the way that John Russell was sadly unable to.