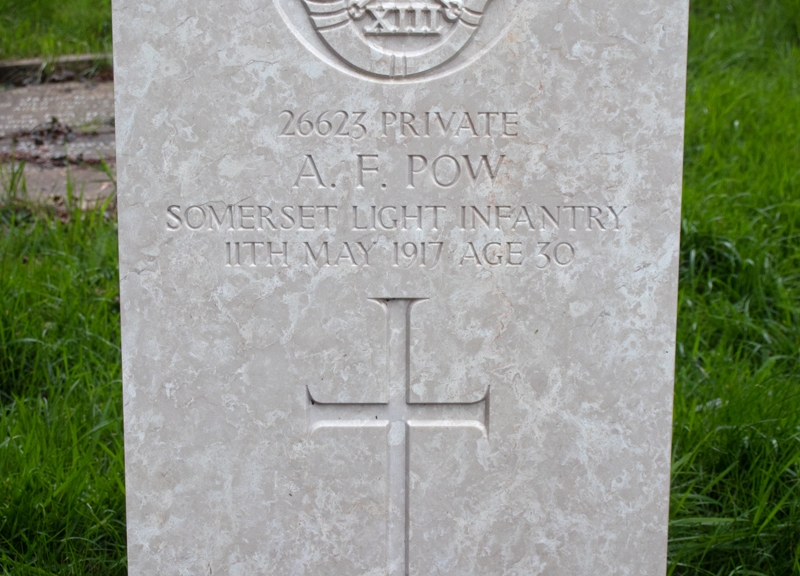 Albert Francis Pow was born in the autumn of 1886, one of five children to Albert and Annie Pow from Somerset. Albert Sr. was a farm labourer, but by the time he left school, Albert Jr. started work as a porter in the Singer sewing machine factory in Bridgwater.

Albert’s father passed away in 1905, at the age of 51, and his son – who was by this time repairing the sewing machines – became head of the household.

He was obviously good at what he did, because, by the time he married in 1913, he was able to support his wife Leonora as branch manager for the Singer store in the town. The young couple soon moved on, as, when war broke out, he was manager of the shop in Barnstaple.

War came calling, and while the date of his enlistment is absent from his records, Private Pow joined the 1st Battalion of the Somerset Light Infantry. Sent to the front, he quickly became ill, suffering from dysentery and trench foot, which led to him being hospitalised for nearly two months.

Returning to his troops, Private Pow’s health remained unsteady, and he soon contracted trench fever. He was evacuated back to England for treatment, and was admitted to the Canadian Red Cross Memorial Hospital in Taplow, Buckinghamshire.

Sadly, Albert was not to recover this time; he died at the hospital on 11th May 1917 as a result of empyema (pleuritis) and an abscess of the axilla (armpit). He was just 30 years old when he died.

Albert Francis Pow lies at rest in the Wembdon Road Cemetery in Bridgwater.

Albert left behind his widow, Leonora and their child Vanessa. Leonora was to be reunited with her late husband; she died in August 1986, and is buried with her beloved.