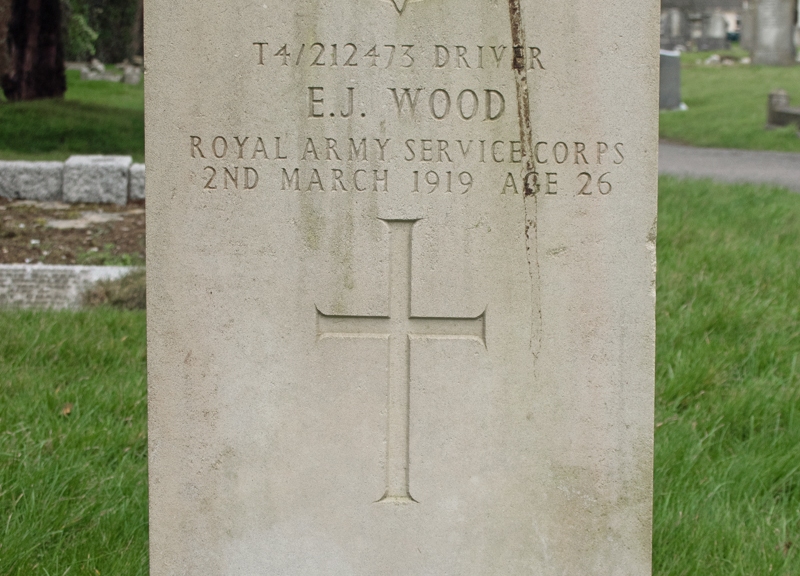 Ernest James Wood was born in 1891, one of ten children to Alfred and Charlotte Wood. Alfred was a carpenter and machinist for a timber merchant, and, by the time of Ernest’s birth the family lived in Bridgwater, Somerset.

When hostilities broke out, Ernest was quick to enlist. He joined the Royal Army Service Corps in September 1914. Driver Wood was assigned to the Horse Transport Depot Company at Park Royal in London, and there is a note of him being injured on 29th July 1916. Sadly, little else of his military service remains.

In January 1916, Ernest married Hilda Williams. She was the same age as her new husband, and was the daughter of Thomas and Elizabeth, who were also from Bridgwater.

The trail of Driver Wood goes a little cold after that. He was demobbed om 6th January 1919 and on the release form declared that he was not medically unfit as a result of his military service.

Frustratingly, the trail goes totally cold at that point. All we know for certain is that Ernest died on 2nd March 1919, two months after leaving the army. There a no records confirming a cause of death but, as he does not appear in any contemporary newspapers, it is likely that the cause was not unusual; perhaps one of the respiratory conditions going around at the time, such as influenza or pneumonia. Whatever the cause, Ernest was just 28 years old when he died (his headstone is based on an incorrect date of birth).

Ernest James Wood lies at peace in the St John’s Cemetery in his home town of Bridgwater, in Somerset.