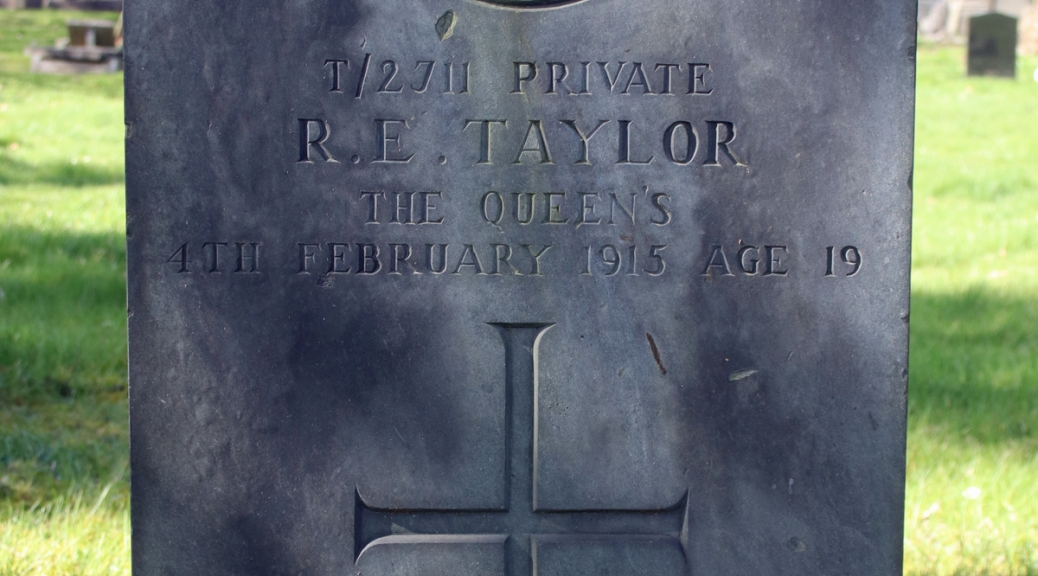 Richard Edmundson Taylor was born in 1895, one of nine children to Frederick and Emma Taylor. Frederick was from Portsmouth, Emma from Blackburn, but the couple had settled their family in Kent, where Frederick worked as an engineer and pattern maker at the Naval Dockyard in Chatham.

When he left school, Richard took work as an apprentice photographer – his older sister Mildred worked as a re-toucher in the same studio. The 1911 census reveals that his eldest sister, Alice, was working as a governess; the family of eleven were living in a small terraced house in Seaview Road, Gillingham – a road that, ironically, had no view of the nearby River Medway or Thames Estuary.

At this point, Richard’s trail goes cold. He enlisted in the Royal West Surrey Regiment – also known as the Queen’s – but there is no documentation to confirm when this was.

Private Taylor’s battalion, the 2/4th, would go on to fight at Gallipoli, but he would not have been involved, and, more than likely, did not see any overseas service. The prefix to his service number (T/2711) may well have indicated he was in training when he passed away, although, again, there is no physical evidence to confirm this.

Nor is there any indication of the cause of Private Taylor’s death. His name does not appear on any contemporary newspaper reports, so it is unlikely that it was due to any misadventure; more probably, he passed away from one of the many communicable diseases that became common in the training camps of the 1910s.

Whatever the cause, Private Taylor died at home on 4th February 1915. He was just 19 years old.

Richard Edmundson Taylor lies at rest in the Woodlands Cemetery in his home town of Gillingham, Kent.