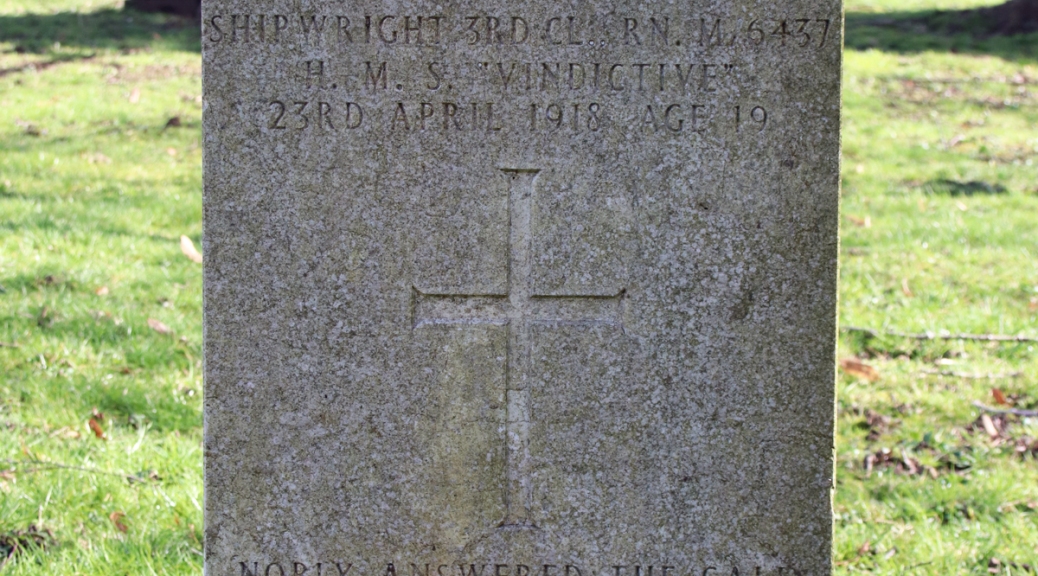 Thomas Tannahill Cochran was born on 28th February 1899, in Gillingham, Kent. He was one of nine children to Woodrow Cochran and his wife, Janet, née Tannahill. Woodrow was an engine fitter and both he and Janet were from Paisley in Scotland; they moved to Kent not long after getting married, presumably as Woodrow found work in the Naval Dockyard in Chatham.

Thomas followed his father and older brothers into the Navy, initially enlisting as a Boy Shipwright on 12th August 1913. He served most of his time at the local dockyard, before setting out to sea in March 1918.

At this point, Shipwright Cochran’s service records need a bit of translation. Tragedy certainly occurred, but the details are a bit disparate.

According his naval service records, Shipwright Cochran was aboard HMS Pembroke II when he was killed in action off the Belgian coast on 23rd April 1918. However, HMS Pembroke II was actually a land-based vessel in Kent.

His gravestone, however suggested that he was assigned to another ship – HMS Vindictive. This was one of the vessels involved in the “Zeebrugge Raid”, an attempt by the Royal Navy to block the Belgian port by scuppering obsolete vessels in the canal entrance.

The Vindictive was to lead a diversion, drawing any attack away from the raid’s true target. However, bad weather blew the ship off course, which brought her within reach of enemy guns. Sadly, casualties were numerous, and Shipwright Cochran was one of those who fell in the German attack. He died on 23rd April 1918 at just 19 years old.

Thomas Tannahill Cochran’s body was recovered, and he lies at rest in the Woodlands Cemetery in his home town of Gillingham, Kent.