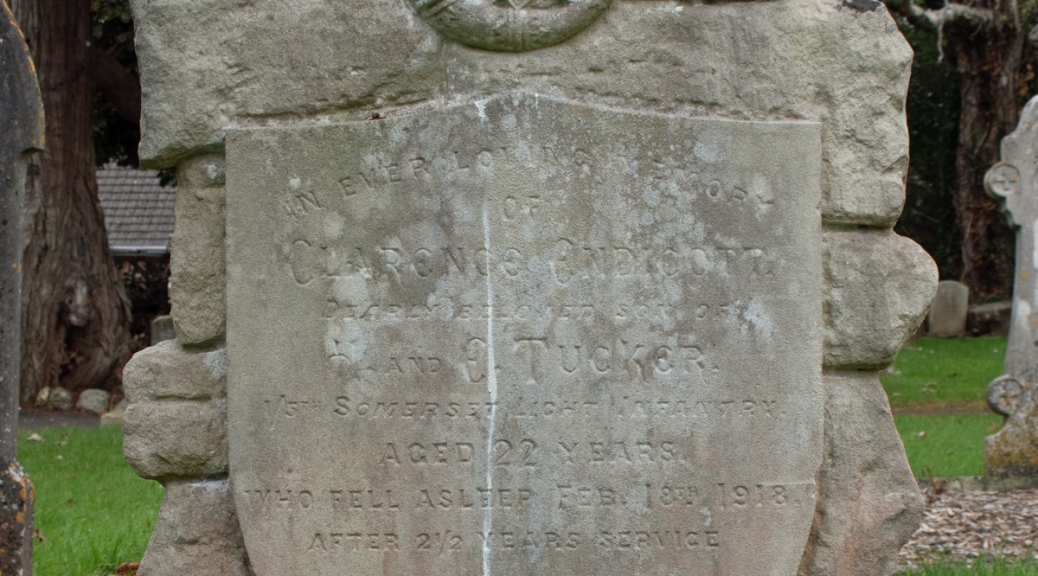 Clarence Endicott Tucker was born in the summer of 1895 and was the oldest of eight children (six of whom survived) to Samuel and Emma Tucker. Samuel was a sign writer from Axminster in Devon, although he had lived in Nottingham in the early 1890s, where he had met and married Emma, and this was where Clarence was subsequently born.

Within a couple of years, the family had moved to Yeovil, Somerset, where Clarence’s siblings were born and the family were raised. The 1911 census recorded the family as living in a house in the centre of town, the household comprising of Samuel, Emma, their six children and Samuel’s sister. Clarence, having left school, was working as a junior clerk for a cheese and butter merchant.

When was broke out, it was clear that Clarence was keen to play his part. He enlisted in September 1914 and joined the Somerset Light Infantry as a Private. It must has seemed an overwhelming experience as, within a month he was on board a ship headed for India.

Private Tucker spent more than two year serving with the 5th Battalion, before contracting tuberculosis. After six weeks in hospital, he was evacuated to Egypt and then back to England again. He was admitted to the Southern General Hospital in Bristol, where an assessment identified that he was no longer medically fit enough to serve in the army. He was discharged on 2nd April 1917, having served for three and a half years.

At this point Clarence’s trail goes cold. He died on 18th February 1918, at the age of 22 years old. There is no confirmation of the cause of his death, although it seems likely to have been related to the problems he had with his lungs.

Clarence Endicott Tucker lies at rest in the cemetery in the Somerset town he called home, Yeovil.