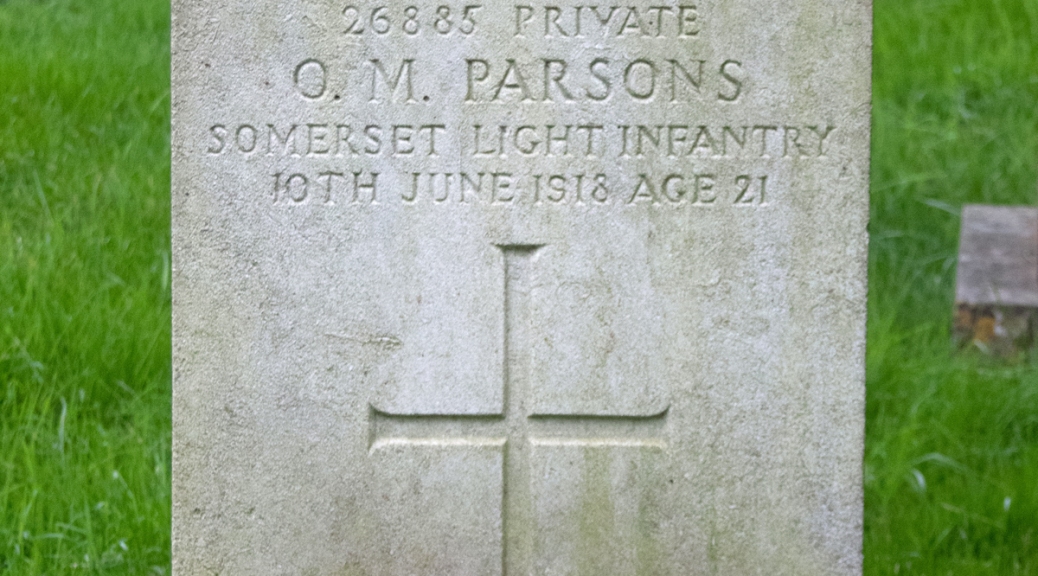 Oliver Metford Parsons was born in North Newton, Somerset, on 3rd January 1897. His parents were Thomas and Lily Parsons, and he was one of four children.

Thomas was a carter and labourer on a farm, and this is the trade his son took up when he left school. The 1911 census recorded Oliver as living with the market gardener Edmund Durridge and his family – who lived in the same village – and working a labourer for them.

Lily had passed away in 1907, so this move may have had something to do with a change in family circumstances – the 1911 census recorded Thomas living in the village with Hannah Parsons, having been married for just a year.

When was came to Europe, Oliver was keen to play his part for King and Country. While full service records are not available, documents confirm that he enlisted in the Somerset Light Infantry in the spring of 1917. Private Parsons was assigned to the 7th (Service) Battalion and soon found himself on the Front Line.

While it is not possible to pinpoint exactly where Oliver fought, his battalion fought at the Third Battles of Ypres and, in April 1918 moved to Amiens.

It was in June 1918 that Private Parsons was caught up in a gas attack. He was injured and medically evacuated to England for treatment, where he was admitted to the Ipswich Hospital in Suffolk. Sadly, his injuries proved too severe, and he passed away at the hospital on 10th June 1918. He was just 21 years of age.

Oliver Metford Parsons’ body was brought back to his Somerset home. He was laid to rest in the graveyard of St Peter’s Church in North Newton.