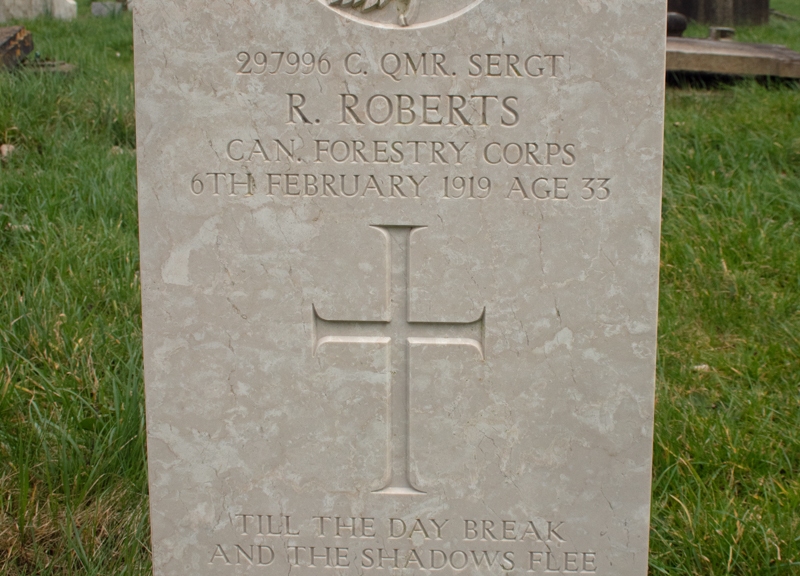 Robert Roberts was born in Liverpool in November 1887 the youngest of two children to Robert and Alice Roberts.

The New World beckoned for the Roberts family, and they set sail for Canada when Robert Jr was just 4 years old. The family settled in the city of Regina, Saskatchewan.

Little is recorded about Robert Jr until October 1911, when he married a Quebecois woman called Edna Webber. The young couple went on to have two children, a daughter, One, and a son, George.

In April 1916, he enlisted in the Canadian Expeditionary Force. His trade was noted as a Lumberman, and his record notes that Robert had already served as part of the 95th Saskatchewan Rifles.

Joining the 224th Battalion, Robert was shipped to England in May 1916. He transferred to the Canadian Forestry Corps in November, reaching the rank of Staff Sergeant, and was assigned to the company’s Base Depot in Sunningdale, near Windsor.

When the war ended, demobilisation was still a way off for a lot of soldiers, particularly those from the Commonwealth. Robert was transferred to Stirling, and was appointed Quartermaster Sergeant (responsible for supplies and stores) for 121st Company.

On 28th January 1919, Robert was admitted to the Royal Infirmary in Stirling with influenza and double pneumonia. Sadly, he passed away just over a week later, breathing his last on 6th February 1919. He was 33 years old.

Robert Roberts lies at peace in the Wembdon Road Cemetery in Bridgwater, Somerset.

There is no evident connection between Robert and Bridgwater, so why this was chosen as his place of rest is a mystery. It is likely that there was some sort of family connection, but that cannot be definitely established.