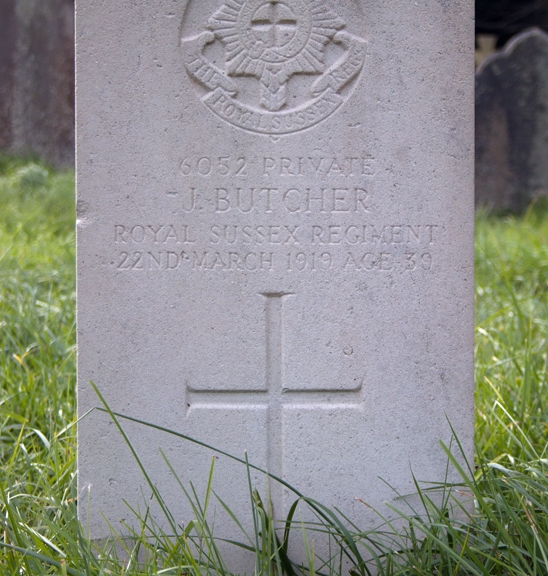 James Butcher was born in the village of Durrington, West Sussex, on 12th April 1880. He was one of seven children to agricultural labourer Henry Butcher and his laundress wife, Sarah. The family were dedicated to the countryside life; by the time of the 1891 census, James was listed as a cowboy, as was his older brother, so at 10 years old, his time would have been spent up on the South Downs, tending a farmer’s bovine herd.

In 1904, James married Eleanor Andrews, the daughter of a publisher’s packer from London. The couple would go on to have six children: William, Thomas, George, Walter, Ernest and Gladys. By the time of the 1911 census, the family were living in Broadwater, to the north of Worthing, and James was listed as a general labourer for the town council.

When war arrived on England’s shores, James was keen to to his bit. He initially joined the Royal Sussex Regiment, although subsequently moved to the Agricultural Company of the Labour Corps. Sadly, Private Butcher’s military service records are no longer available, so it’s impossible to confirm exact dates for his time in the army.

James survived the conflict, but the next record for him is the Army Register of Soldiers’ Effects. This confirms that he was admitted to the Swandean Isolation Hospital on the outskirts of Worthing, and subsequently passed away there. There’s nothing to confirm his cause of death, although, based on the nature of the hospital, it is likely to have been one of the lung conditions prevalent at the close of the war.

James Butcher died on the 22nd March 1919, at the age of 38 years old. He was laid to rest in the Broadwater Cemetery, not far from his home.