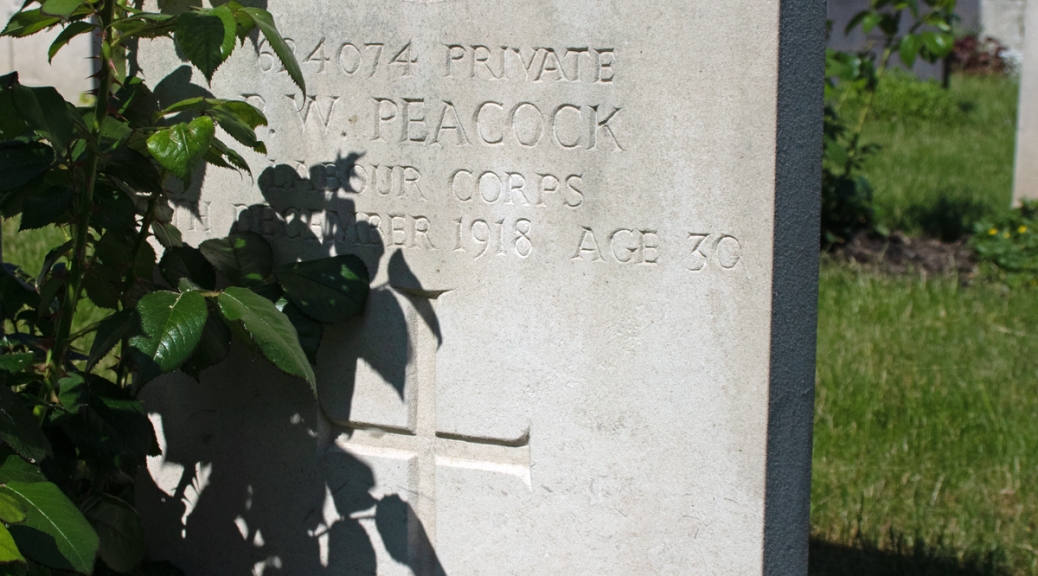 Percival William Peacock was born in early 1888, the son of Thomas and Louisa Peacock. Little information survives about Percival’s early life, other than that he was one of two children, and that, like his parents, he had been born in Gillingham, Kent. Thomas was a sexton and gravedigger, but Percival found work as a hairdresser.

The 1911 census shows him as head of the household in a cottage in the village of Stone, near Dartford; he was living there with his cousin James and his family.

War was now imminent, but again there is limited information about Percival’s involvement. He did enlist, joining the Labour Corps as a Private, but this seems to have been later in the war. He appears to have served on home soil, although there is nothing to confirm this either way.

The next concrete evidence for Percival is the Army Register of Soldiers’ Effects. This confirms that he passed away on 5th December 1918 at the Paddington Military Hospital in London. No cause of death is provided, and the beneficiary given is his father, Thomas. Private Peacock was just 30 years old.

Percival William Peacock was laid to rest in the Grange Road Cemetery in Gillingham, Kent. Hs is commemorated in the nearby Woodlands Cemetery.

Tragedy was not far from the Peacocks’ life. Clara’s mother, Bessie, had passed away just a couple of weeks before Percival. Clara herself died on 5th March 1919, three months after her husband.