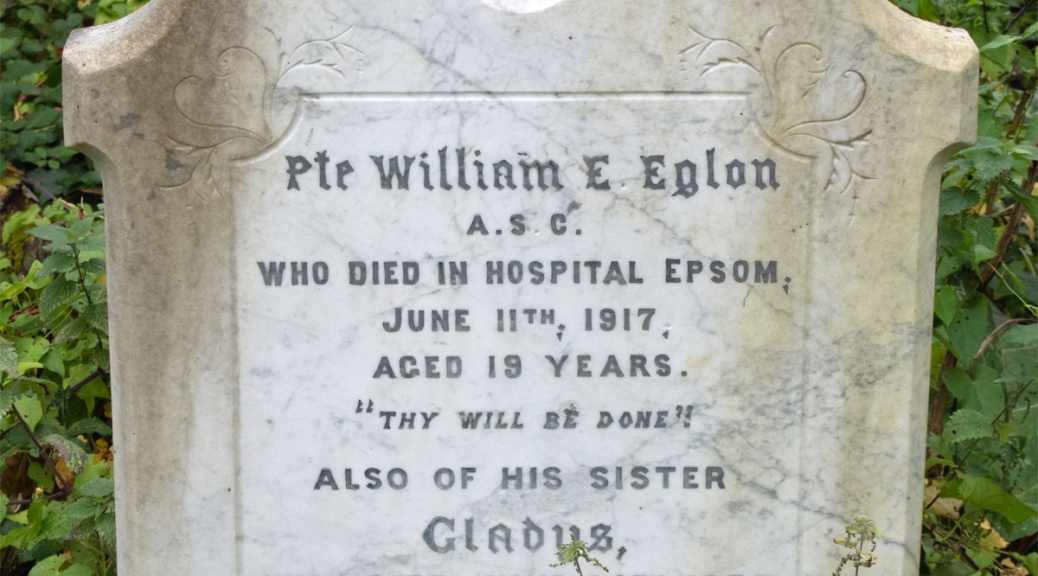 William Ernest Eglon (also known as Ernest William Eglon) was born in the Somerset village of Stoke-under-Ham (or Stoke-sub-Hamdon), in the spring of 1898. One of five children, his parents were stonemason Arthur Eglon and his glovemaker wife Sarah Elizabeth Eglon (who was better known as Bessie).

Unfortunately, little information on William’s early life remains documented. When war broke out, he was working at the Co-operative Bakery in the village. He was keen to do his bit, however, and enlistedin the Royal Army Service Corps as a Private not long after his eighteenth birthday.

Private Eglon was sent to serve in Essex, working as a baker in the Supply Section there. Within a couple of weeks of arriving, however, he was admitted to the Field Hospital in Chelmsford. He was suffering from an ear infection, and this turned out to be significant enough for him to be transferred to the Horton County of London War Hospital in Epsom.

William developed an abscess in the temporo sphenoidal region of his skull (in front of his right ear), which was operated on on the 27th May 1917. By this time meningitis had set in and, despite a second operation just over a week later, the conditions took hold.

William Ernest Eglon’s body was brought back to Stoke-under-Ham for burial. He lies at rest in the family plot in the graveyard of St Mary’s Church in the village.