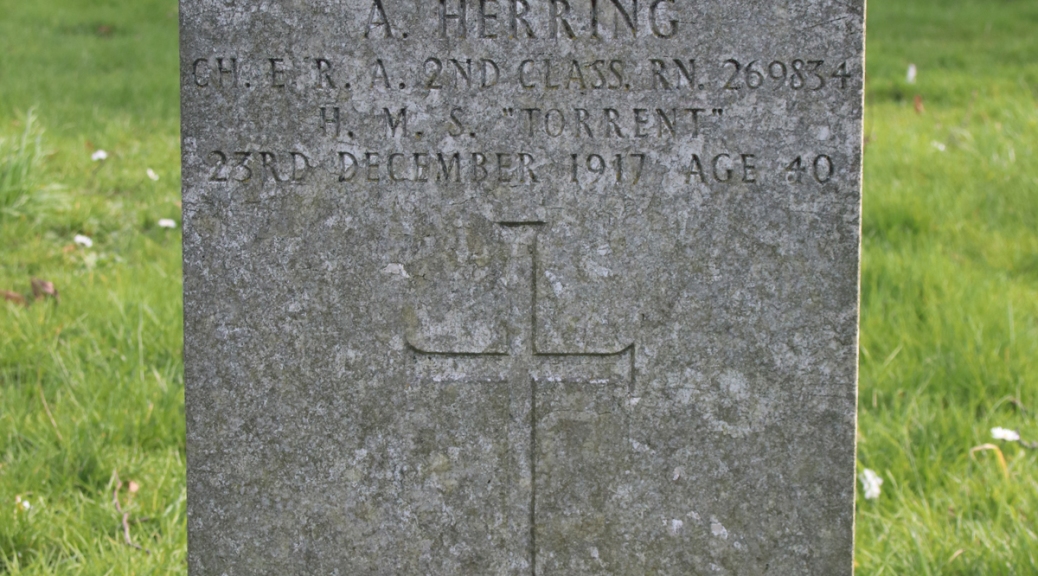 Arthur Herring was born on 5th December 1877, the third of five children to William and Constance Herring. William was a sign writer at the Naval Dockyard in Chatham, Kent, and the family lived in neighbouring Gillingham.

Arthur joined the Royal Navy in September 1899, just short of his 22nd birthday. He worked as an Engine Room Artificer (ERA), and over the twelve years of his initial service, he crewed on board ten different ships. This was in addition to his service at HMS Pembroke, the shore vessel in his home town of Chatham.

Arthur was evidently a hard worker, and he rose through the ranks from ERA 5th Class to ERA 1st Class during this time.

In September 1912, Arthur married Angela Beck; she was also born in Chatham, and was the daughter of a naval Sergeant. The couple didn’t go on to have any children.

War was looming by the time Arthur completed his twelve years’ service. Arthur was recommissioned, serving as Chief Engine Room Artificer 2nd Class on HMS Aquarius and HMS Tyne during the conflict.

In February 1917, Artificer Herring transferred to HMS Torrent. This was a naval destroyer, part of the Harwich Force, patrolling the North Sea.

One of the duties of the Harwich Force was manning the “Beef Run”; the convoys between England and the Netherlands. It was on one of these runs that tragedy struck HMS Torrent.

Only the fourth convoy ship, HMS Radiant was undamaged and picked up the survivors from the three ships. In total, 12 officers and 240 other ranks were killed from the three ships. On HMS Torrent, only three of the crew survived; sixty-eight others perished that night. This included Artificer Herring, although his body was rescued from the water; he was 40 years old.

Arthur Herring lies at peace in the Woodlands Cemetery in his home town of Gillingham, Kent.