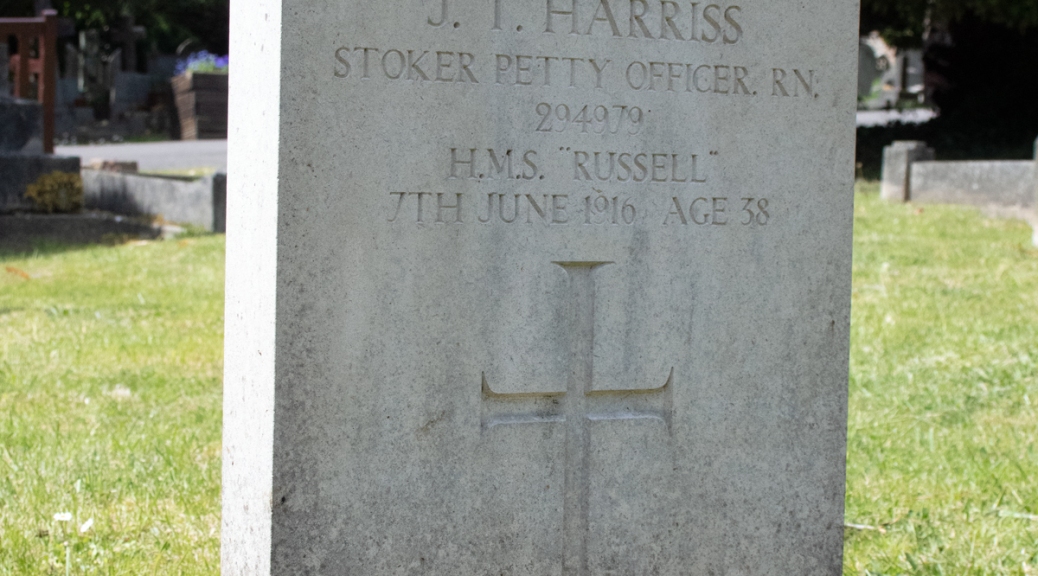 John Thomas Harriss was born on 22nd February 1878, one of seven children to George and Mary. George was a jeweller, who moved the family from London to Weston-Super-Mare when John was three or four years old.

Following in his father’s footsteps was not something John was going to do, and the move to the coast seemed to have sparked an interest in the sea. He enlisted for twelve years’ service in the Royal Navy in March 1900, working as a stoker.

After initial training at HMS Pembroke in Chatham, Kent, Stoker 2nd Class Harriss was assigned to HMS Terpsichore and, over the length of his service, he worked on a further ten vessels. During this time, he was promoted a couple of times, reaching the role of Leading Stoker by 1911, while he was serving aboard HMS Magnificent.

With war imminent, when John completed his period of service, his term was extended until the end of hostilities. He had, by the beginning of 1914, attained the rank of Stoker Petty Officer, and was assigned to HMS Russell.

After the start of the war, this ship was assigned to the Grand Fleet and worked on the Northern Patrol, and in November 1914, she bombarded German-occupied Zeebrugge. The following year, HMS Russell was sent to the Mediterranean to support the Dardanelles Campaign, though she did not see extensive use there.

On 27 April 1916 HMS Russell was sailing off Malta when she struck two mines laid by a German U-boat. Most of her crew survived the sinking, though 125 souls lost their lives. Stoker Petty Office Harriss was one of the survivors; his service records note that he was ‘commended for [the] great coolness shown on the occasion of the loss of HMS Russell’.

Brought back to the UK, John contracted pneumonia, and spent time at home with his family, in Weston-Super-Mare. It was here, sadly, that he was to succumb to the lung condition, and he passed away on 7th June 1916. He was 38 years old.