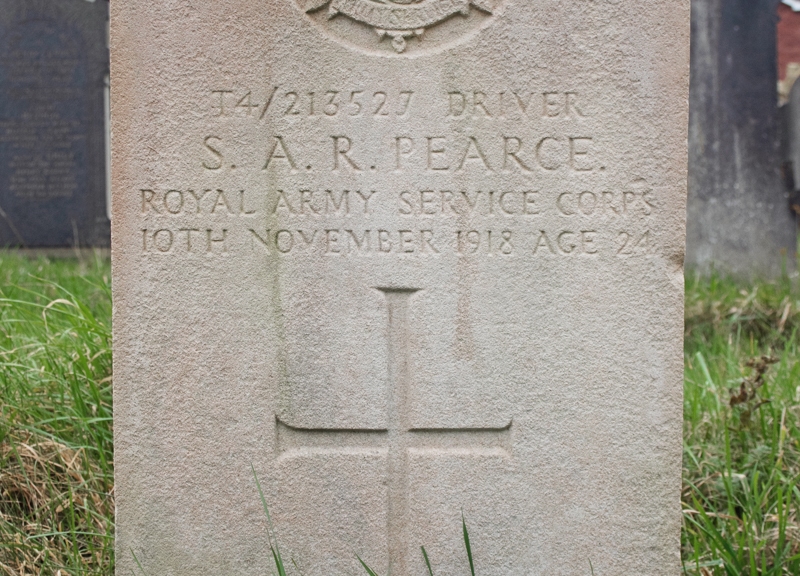 Stanley Arthur Robert Pearce was born in September 1895, the fourth of five children to Edwin and Rosetta Pearce from Bridgwater, Somerset. Edwin was a painter and sign-writer, and it was in the creative trades that his children followed.

Stanley’s eldest brother Clifford became a gardener; his next oldest Edwin Jr was a mason’s labourer; while his older sister Dorothy became a cardboard box maker. By the time of the 1911 census, when Stanley was 16, he was listed as a painter’s errand boy, presumably helping out his father.

War was on the horizon, and Stanley was keen to do his bit. In October 1914, he enlisted, becoming a Driver in the Royal Army Service Corps. Assigned to the 662nd Heavy Transport Company, he was based in London. There was still time for visits home, however, and the local Bridgwater newspaper reported on an ASC football match in which Driver Pearce was involved in October 1915.

By this time, Stanley had met Flossie Vickery, from nearby North Petherton. The couple married the following year, and had two children, Ada and Geoffrey.

In 1916, Driver Pearce’s battalion was shipped off to Salonica in Greece, as part of the British Expeditionary Force in the Balkans. While there, he contracted malaria and dysentery, and was evacuated back to England for treatment in September 1918.

Driver Pearce recovered well enough to enjoy a month’s recuperation, but fell ill again, with a recurrence of malaria, combined with influenza and pneumonia. He was admitted to the Brook War Hospital in South East London, but sadly not recover, and passed away on 10th November 1918, a day before the Armistice was signed. He was just 23 years old.

Stanley Arthur Robert Pearce lies at rest in the Wembdon Road Cemetery in his home town of Bridgwater.

Stanley’s older sister Dorothy – the cardboard box maker – contracted influenza around the same time as her brother and, tragically, died just five days after him. The siblings were buried in a joint funeral at the cemetery.