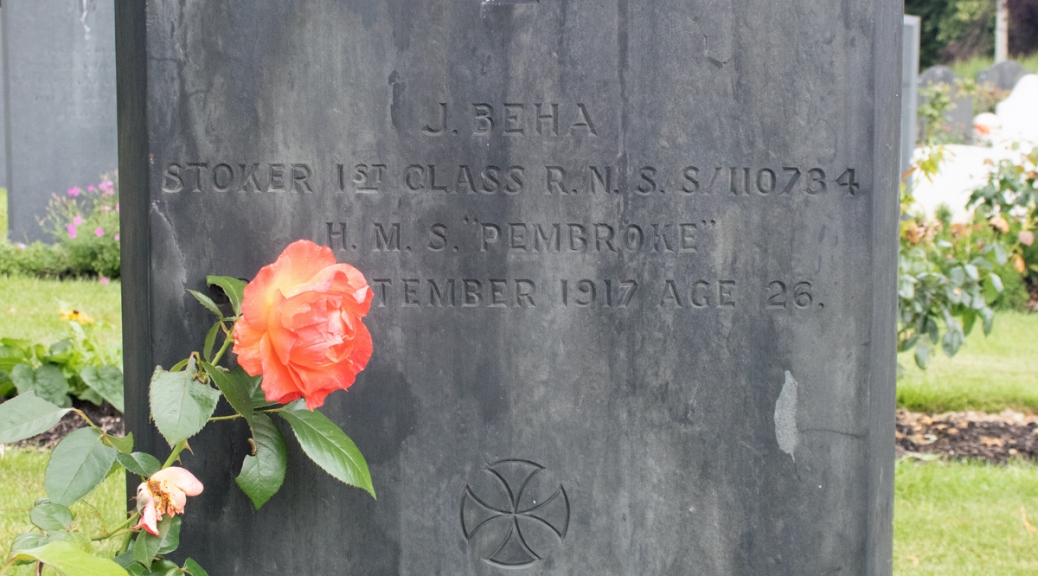 Joseph Beha was born on 16th June 1891, in the Yorkshire town of Whitby. He was the middle of five children to Joseph and Alice Beha, and had a half-sister, through his mother’s previous relationship.

Joseph Sr was a labourer in the local shipyard, and the family had moved to Hartlepool by the time his son had reached 10 years old. The sea had a definite draw for Joseph Jr, and by his twentieth birthday he had enlisted in the Royal Navy as a Stoker 2nd Class.

The service records show Joseph Jr stood 5ft 3.5ins (1.61m) tall, had brown eyes, dark hair and a fresh complexion. His land base was HMS Pembroke, the alternative name for the Royal Naval Dockyard at Chatham, Kent, and it was here that he received his initial six months’ training.

Stoker Beha’s first sea posting was HMS Falmouth, a light cruiser, on board which he served for more than eighteen months, gaining a promotion to Stoker 1st Class in the process. Over the next few years, he was posted to two further ships and, by the time the First World War broke out, was serving on the armoured cruiser HMS Lancaster.

While his record suggests he was of generally good character, Joseph’s time was totally without blemish. He served time in the cells on three separate occasions – for five days in 1913, fourteen days in 1915 and ten days in 1917 – although no evidence of his misdemeanours remains.

The summer of 1917, found Stoker Beha back on dry land in Chatham. HMS Pembroke was a particularly busy place at that point in the war and temporary accommodation was set up. Joseph found himself billeted at The Drill Hall, away from the main barracks.

On the night of 3rd September 1917, Chatham suddenly found itself in the firing line, as the German Air Force launched a bombing raid. One of the bombs landed squarely on the Drill Hall, and Stoker Beha was killed instantly. He was just 26 years old.

Ninety-eight servicemen perished during the Chatham Air Raid that night. They were buried in a mass funeral at the Woodlands Cemetery in nearby Gillingham. This, too, is where Joseph Beha was laid to rest.