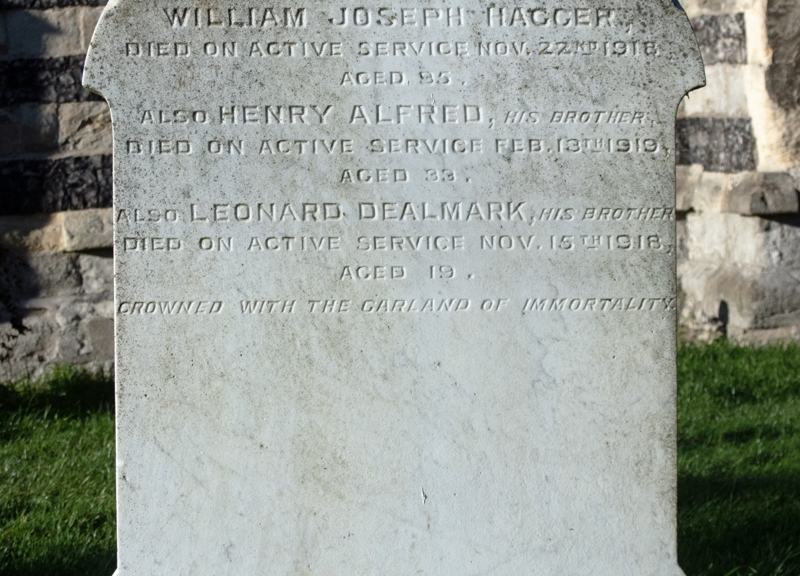 William Joseph Hagger was born in the spring of 1885, one of thirteen children to William Henry Hagger and his wife Emily Ann. The family lived on the Isle of Grain in Kent, where William Sr worked as a labourer in the local cement works.

William Jr was evidently keen to travel. On the 1901 census he is listed as a navyman on HMS Lion, a training vessel in Devonport, Plymouth.

His First World War records state that he officially joined the Royal Navy in 1906, travelling to West Africa as an Able Seaman. While there, he contracted a fever, and was invalided out of the service the following year.

William married Esther Elizabeth Reed in May 1909; by the 1911 census, she was living in Northfleet, Kent, working as a cartridge maker for the local arsenal. William himself is not recorded at the same property, and I have been unable to locate him at this point.

He next appears on the enlistment papers for the Royal Engineers. He joined up very early in the war – December 1914 – and after his training, Driver Hagger embarked for the Western Front in August 1915.

While serving, it seems that his previous affliction resurfaced, and William was dogged by colds and coughs. In the autumn of 1916, he was admitted to a field hospital with haemoptysis (coughing up blood), eventually returning to his unit three months later.

Driver Hagger’s health was fair until, in October 1917, his unit was gassed; he was sent back to England and hospitalised in Aldershot, and this time was discharged from the army six months later.

It seems that William did not recover from his illness and passed away on 22nd November 1918. He was 33 years old.

William’s gravestone also acts as memorial to two of his brothers, Henry and Leonard.

Henry Alfred Hagger was born two years after William. He was also keen to make a name for himself, emigrating to California, and working as a streetcar conductor in Oakland. Initially declaring himself exempt from draft as he had a wife to support, he subsequently joined the British Columbia Regiment on 31st July 1917.

Henry was attached to the Forestry Depot of the Canadian Expeditionary Force, who were to be shipped to Europe to harvest trees for use on the Western Front. However, at the point of his medical – in September 1917 – he was discharged as unfit for active service due to his asthma.

Henry Hagger died on 13th February 1919, presumably of his lung condition. He is buried in Ross Bay Cemetery in British Columbia.

Leonard Dealimark Hagger was born in 1899. He enlisted as soon as he was able to, just short of his 18th birthday. Joining the York & Lancaster Regiment, he was posted in 1918.

His battalion saw some of the fiercest of the battles in the closing months of the war – Estaires, Messines, Bailleul, Kemmel Ridge, Scherpenberg, Selle, Valenciennes – and it is likely that Leonard was involved in some of these engagements.

Private Hagger was wounded in the closing weeks of the war, and passed away in a hospital in Liege, Belgium on 15th November 1918. He had just turned 19 years of age.

Private Leonard Hagger lies at peace in the Robermont Cemetery in Belgium.

Charles Frederick Stubbles was born in Tottenham in 1892. One of eleven children to Richard and Mary Ann Stubbles, by the time of the 1911 census, the family were living in Edmonton. Charlie and his brother had found employment painting gas stoves, while his father was a building foreman.

Charles enlisted in the army in 1916, aged 25 years and 11 months. His service records show that he stood at 5ft 2ins, weighed in at 69lbs; his health was classified as C2 – Free from serious organic diseases, able to stand service in garrisons at home, able to walk 5 miles, see and hear sufficiently for ordinary purposes.

Joining the Labour Corps of the West Surrey Regiment, Private Stubbles initially served on the home front, before being transferred to France as part of the British Expeditionary Force in March 1917.

Charlie seems to have been a bit of a character and was pulled up a few times during his service. On 10th April, he was charged with “committing a nuisance in the barrack room”, for which he was confined to camp for eight days. On 21st August he went AWOL for nearly a day; he was docked eight days’ pay. On 28th October he appeared unshaven and dirty for the 7:15am parade; he was confined to barracks for seven days.

On 4th January 1918, Charles was admitted to a field hospital with diarrhoea; while there he was diagnosed with tuberculosis; he succumbed to this two days later, dying on 7th January 1918. He was 26 years old.

Thomas Griffith was born in Fulham in 1891. He was the eldest of five children to John Griffith and his wife Emma, although John had been married previously (to Eliza, who had died in 1880), and so Thomas had a further six half-siblings.

By the 1911 census, he was 20, working as a printer’s apprentice, while his father was unemployed and his mother worked as a charwoman.

The Great War had been fought for a year when Thomas enlisted in August 1915. He joined the 8th (Service) Battalion of the Bedfordshire Regiment. The regiment fought in most of the battles on the Western Front, and, during his time there, he was promoted to the role of Sergeant.

Beyond this, Sergeant Griffith’s service records give little more information about him. His war pension and the Register of Soldiers’ Effects show that he was killed in action on Monday 17th April 1916. He was 25 years old.

Sergeant Thomas Griffith is commemorated at the Essex Farm Cemetery in West-Vlaanderen, Belgium.

Harold Edward Shelbrooke was born in Poplar, East London, the eldest son of Edward and Jane. One of seven children, Harold lost his father – a labourer in the local gasworks – when he was only eight.

To support his mother – most of his sisters having moved on – he soon found employment as an umbrella maker, and by the 1911 census he had worked his way up to the position of warehouseman.

In July 1915, he married Alice Pulley; six months later their son, George was born. The young family had moved south of the Thames by now, and were living in Greenwich.

Private Shelbrooke’s military records are pretty sparse; he enlisted after marrying Alice – their Banns show him as an umbrella maker – and served in the King’s Royal Rifles.

He saw battle on the Western Front and was involved in the Battle of Menin Road Ridge at Ypres. Harold’s military documents record him as wounded and missing on the day of that battle – 20th September 1917 – and he was officially declared dead on 9th November that year. He was 33-years-old.

Private Shelbrooke has lost his father at the age of eight; his son, George, was not even two years old.

Private Harold Shelbrooke is commemorated at the Tyne Cot memorial in Zonnebeke, Belgium.

Frank Ernest Woods was born in 1885, one of seven children to Thomas and Alice. Thomas was a labourer and he raised his family in Worcestershire.

Frank left home early – by the time of the 1901 census, he was living as a gardener for the Cornforth family, who were grain merchants in South Claines, near Worcester.

Frank’s work with the family continued; the 1911 census show that they had relocated to Kensington. The Cornforth family were now running the Eaton Court Hotel, a boarding house with nineteen rooms; the 25-year-old Frank had been elevated to the role of waiter.

Another of the Cornforths’ staff was a housemaid, 20-year-old Ethel Elizabeth James; within a matter of years, the couple were courting, and Frank and Ethel married in November 1915.

The Great War was already being waged across the Channel, and Frank enlisted, joining the Rifle Brigade in June 1916. Within three months, he was fighting on the Western Front.

Private Frank Woods was killed in action in Belgium on 1th January 1918. He was 33 years old. He is remembered on the Tyne Cot Memorial in Zonnebeke.