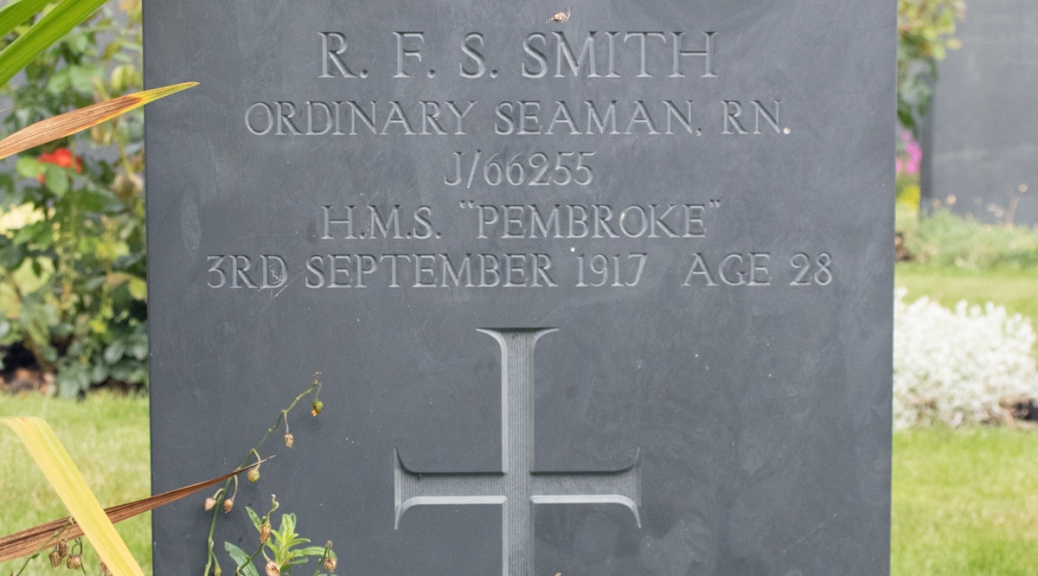 Robert Frederick Sydney Smith was born on 24th July 1889 in Peckham, London. One of seven children, his parents were Robert Smith – a tailor and draper – and his wife Ada.

Little more information is available on Robert Jr’s early life. He married Alice Brookman, a leatherworker’s daughter, on 3rd September 1911, and was, by this time, working as a bank clerk. The couple went on to have three children: Sidney, Eileen and Ronald.

War was on the horizon and, at Robert was soon called up. His service records are dated 31st January 1917, and note that he stood 5ft 5.5ins (1.66m) tall, had brown hair, brown eyes and a medium complexion.

Robert was employed as an Ordinary Seaman, and was initially posted to HMS Pembroke, the shore-based establishment at the Royal Naval Dockyard in Chatham, Kent. After a few weeks, he was posted to HMS Crescent, a cruiser that served in the North Sea.

After six months at sea, Ordinary Seaman Smith landed back in Kent. HMS Pembroke was a busy place at that point in the war, and additional accommodation was desperately needed. Robert found himself billeted at Chatham Drill Hall, away from the main barracks.

At this point in the war, the German Air Force had been suffering huge losses during the daylight bombing raids it had been undertaking. It was imperative for them to minimise these losses, and so a new tactic – night time raids – was employed.

The first trial of this approach was on the night of 3rd September 1917, and Chatham suddenly found itself in the firing line, startlingly unready and fundamentally unprotected. One of the German bombs landed a direct hit on the Drill Hall, and Ordinary Seaman Smith was killed. He was just 28 years old.

Ninety-eight servicemen perished during the Chatham Air Raid that night. They were buried in a mass funeral at the Woodlands Cemetery in nearby Gillingham. This, too, is where Robert Frederick Sydney Smith was laid to rest.