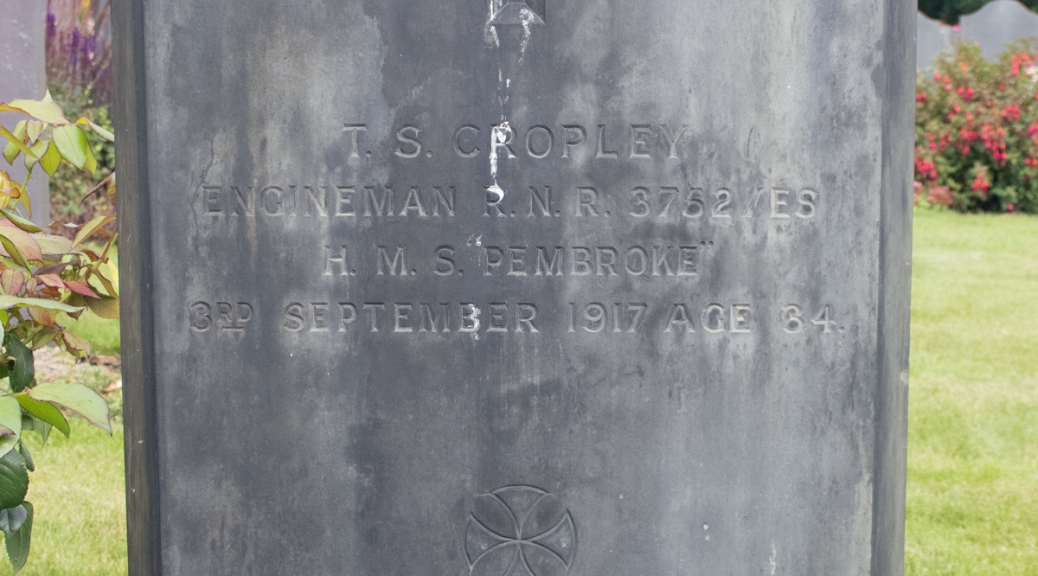 Thomas Samuel Cropley was born on 16th November 1882 in the Suffolk village of Mutford. The fifth of eight children, his parents were Robert and Hannah Cropley. Given Mutford’s proximity to the Hundred River Hundred and the coastal town of Lowestoft, it is little surprise that Thomas’ father was a ropemaker. Hannah was also employed, the 1901 census recording her as a monthly nurse – helping women during the month after childbirth.

Thomas’ location to the coast made fishing an ideal choice of work for him, and when he left school he followed his three older brothers into the trade. Indeed, he listed his trade as a deep sea fisherman on his marriage records.

As a young man, he had met bricklayer’s daughter Edith Tuttle, and they tied the knot on 29th May 1906. The couple set up home in Factory Street, Lowestoft, and went on to have seven children.

Sadly, little information on Thomas’ wartime service remains documented. His knowledge of boats and the sea made the navy an obvious option for him, and he enlisted in the Royal Naval Reserve.

Engineman Cropley was assigned to HMS Pembroke – this Royal Naval Dockyard at Chatham in Kent. While it is likely that he served on ships as well, this is certainly the base to which he returned.

Thomas found himself based here in the summer of 1917, which was a particularly busy place at that point in the war. Additional accommodation was desperately needed and he found himself billeted at Chatham Drill Hall, away from the main barracks.

By 1917, the German Air Force had suffered huge losses during the daylight bombing raids it had been undertaking. It was imperative for them to minimise these losses, and so a new tactic – night time raids – was employed.

The first trial of this approach was on the night of 3rd September 1917, and Chatham suddenly found itself in the firing line, startlingly unready and fundamentally unprotected. One of the German bombers landed a direct hit on the Drill Hall, and Engineman Cropley was killed. He was just 34 years old.

Ninety-eight servicemen perished during the Chatham Air Raid that night. They were buried in a mass funeral at the Woodlands Cemetery in nearby Gillingham. This, too, is where Thomas Samuel Cropley was laid to rest.

The lives of Thomas’ family outlines a lot about living conditions in the late nineteenth and early twentieth centuries, with a large number of his relatives dying young.

His father was 68 when he died in 1916; Hannah had passed away fourteen years before, when she was 56 years old. Of his siblings, two did not survive childhood, one died their 20s, one was aged 40, while three reached their late sixties.

Thomas’ widow died in 1921, at the age of 35; their two youngest children died before their first birthdays. Of the other five, one was 31 when he died, while the others lived much longer – one was in their mid-70s, two in their eighties, and the oldest reached her hundredth birthday. A varied legacy indeed.