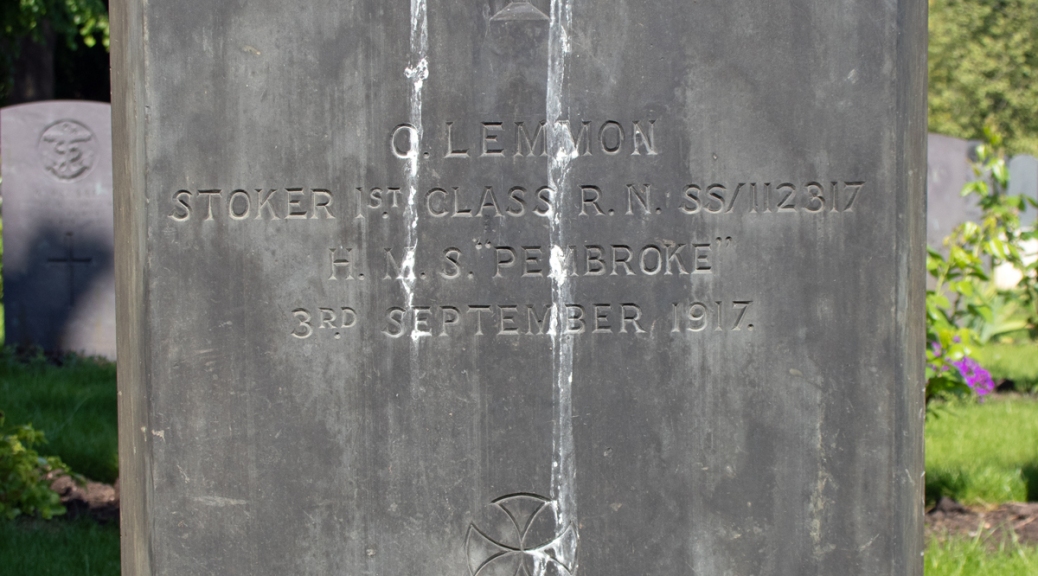 Charles Lemmon was born in Norwich, Norfolk on 12th July 1892. He was one of ten children and the son of bricklayer Henry Lemmon and his wife Sophia.

When Charles left school, he found work as an errand boy; by the time of the 1911 census, he had moved to Cambridge. He was living with John Buol, a Swiss confectioner and pastry chef who had set up a restaurant in the centre of the city, opposite King’s College.

The move from Norfolk to Cambridgeshire must has ignited a yearning for travel, however. Within a year, Charles had enlisted in the Royal Navy, and was taken on as a Stoker 2nd Class. His naval records show that he stood at 5ft 2ins (1.57m) tall, had brown hair, grey eyes and a fair complexion. It was also noted that he had a scar on his left leg.

Stoker Lemmon was set to see the world. After his initial training at HMS Pembroke – the Royal Naval Dockyard in Chatham, Kent – he was assigned to HMS Berwick, an armoured cruiser that sailed between England and the Americas.

The following year, Charles was reassigned to HMS Swiftsure, and received a promotion to Stoker 1st Class. He returned to HMS Pembroke in May 1916, and, after a couple of months on land, boarded HMS Titania, a submarine depot ship that had recently seen action in the Battle of Jutland.

Stoker Lemmon spent just under a year on the Titania, before again returning to Chatham in the spring of 1917. HMS Pembroke was a crowded place that summer, Charles was billeted in temporary accommodation in the dockyard’s Drill Hall.

On 3rd September, the German Air Force was trialling night raids on English locations; Chatham found itself in the line of fire. The Drill Hall received a direct hit, and Stoker 1st Class Lemmon was killed, along with close to 100 other servicemen resting there. He was just 25 years of age.

The servicemen who lost their lives in the Chatham Air Raid, including Charles Lemmon, were laid to rest in the Woodlands Cemetery in nearby Gillingham.