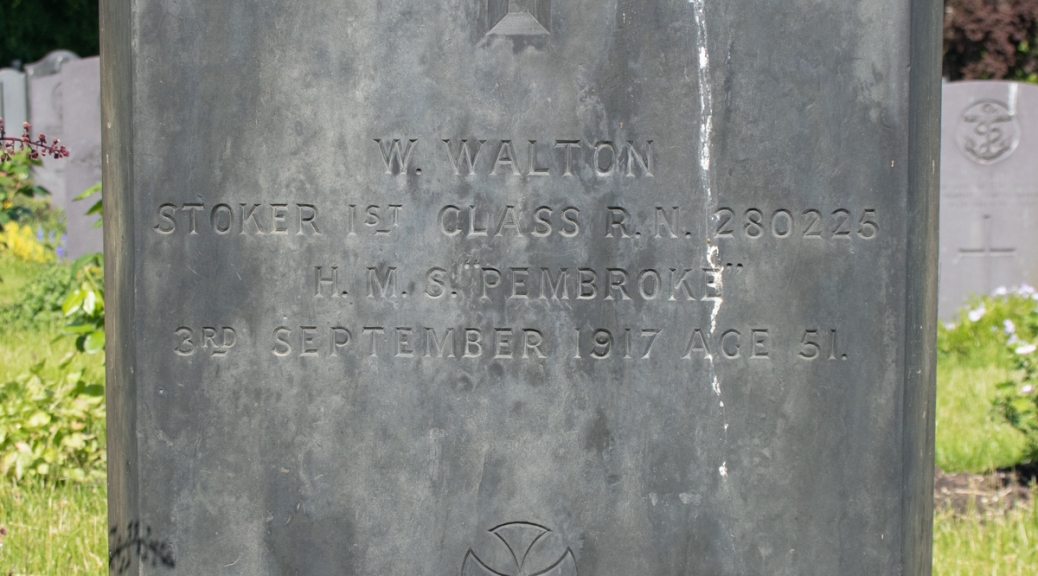 William Walton was born in St Neots, Cambridgeshire, early in 1868, the oldest child of William Moran and Hannah Walton. The couple married shortly after William’s birth and went on to have six further children. William Sr was a bricklayer’s labourer from Cambridgeshire, and until his mother’s death in 1903, William Jr used his father’s surname.

By the time of the 1881 census, William Sr had moved the family to London, where work was more plentiful. It was here that his eldest son met Annie Vigo; they married in Bethnal Green in August 1886 – using Hannah’s maiden name – and went on to have a son – also called William – the same year.

William was also working as a labourer by this point, but by the mid-1890s he and Annie had five children, and he needed a steadier income. In August 1895, he enlisted in the Royal Navy for a period of 12 years. His service record show that he stood 5ft 4ins (1.63m) tall, had brown hair, blue eyes and a fair complexion. He was also noted to have a scar on his head and an anchor tattoo on his left forearm.

Stoker 2nd Class Walton was initially based at HMS Victory, the training base in Portsmouth. By April 1896 he had been given his first off-shore assignment, HMS Fox. This was a cruiser, and he spent more than three years aboard, gaining a promotion to Stoker 1st Class in the process.

The summer of 1899 saw William back on land, as he was assigned to HMS Pembroke, the shore-based establishment at the Royal Naval Dockyard in Chatham. He remained here for the next three years, and returned to the dockyard in between assignments at sea.

In August 1907 Stoker Walton’s term of service with the navy came to an end, and he was placed on reserve. By this point he and Annie had had two more children, bringing the total to seven. The 1911 census found the family living in London, where William was still recorded as a stoker.

War was imminent, and, when hostilities broke out, William was recalled. This time, and probably because of his age, he was wholly based on land, spending nine months in Portsmouth, and the rest of the time in Chatham.

HMS Pembroke was a busy place and, in the summer of 1917, it had reached capacity. The Drill Hall was used as temporary accommodation, and this is where Stoker Walton found himself billeted.

On 3rd September, the German Air Force was trialling night raids on English locations to avoid suffering casualties in daylight; that night Chatham found itself in their flight path. The Drill Hall received a direct hit, and Stoker 1st Class Walton was killed, along with close to 100 others. He was 49 years old [the gravestone suggests a different age].

William Walton was laid to rest in the Woodlands Cemetery in Gillingham, within walking distance of the dockyard that had become his home. He was buried alongside the other victims of the Chatham Air Raid.

William’s younger brother Arthur Moran was also involved in the hostilities of the First World War. As a Bombardier in the Royal Garrison Artillery, he was caught up in the fighting on the Western Front, losing his life on 6th February 1917, seven months before his older brother. He was laid to rest in the Cité Bonjean Military Cemetery in Armentières, France.