Hector Joseph Parks was born in the spring of 1885, the youngest of five children to William Jacob and Mary Ann Parks. William was a ship’s steward who, when Mary died in 1895, remarried, giving Hector a further two half-siblings.

With William employed at sea, Hector spent a lot of time with his paternal grandparents and, in fact, both the 1891 and 1901 censuses recording living in East London with them. That later document shows that Hector had left school, and was working as a carman for a delivery company.

The next available record for Hector comes thirteen years later, when it is evident that he was among the first to volunteer for war service. He enlisted in the Middlesex Regiment and, while full details of his army career are not available, he soon found himself in the thick of things, arriving in France on 14th August 1914.

Private Parks’ battalion – the 4th – was caught up in skirmishes from the outset of war, fighting at Le Cateau, Marne, Aisne and Hooge. Over the next few years, the Middlesex Regiment found itself at The Somme and Ypres and, while it is not possible to place Hector directly in these conflicts, it seems likely that he would have been involved in a lot of them.

In January 1918, Private Parks was back on home soil, having been admitted to the Auxiliary Hospital at Ashcombe House in Weston-super-Mare, Somerset. Sadly, the cause of his return to England is lost to time, but, he was to succumb, passing away on 20th January 1918, at the age of 32 years old.

Hector Joseph Parks was laid to rest in Somerset – he is buried in the Milton Road Cemetery in Weston-super-Mare. 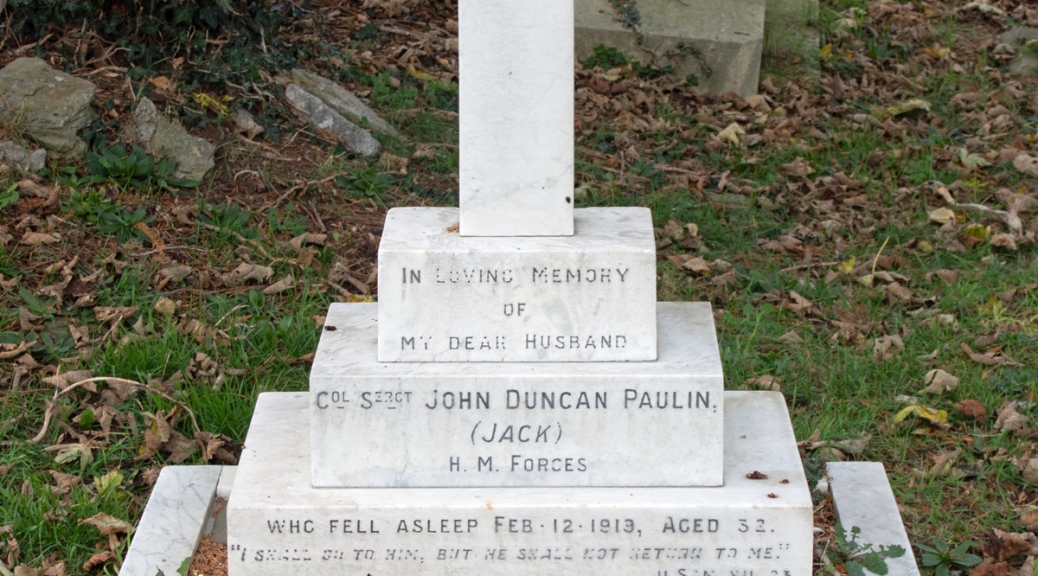 John Duncan Paulin was born in January 1885 in Liverpool, the youngest of two children. His parents – John Robert (known by his middle name) and Jane Paulin – were born in Scotland, but seemed to have moved to the Lancashire port by the late 1870s.

When he left school, John – who became known as Jack – found work as a clerk, but a life of adventure – and a more reliable career – beckoned. On 14th August 1904, he enlisted in the Border Regiment as a Private for a period of seven years. During that time, he served in barracks across the country – from Carlisle to Plymouth – and, by the time he was put on reserve in 1911, he had reached the rank of Corporal.

When war was declared, those servicemen on reserve were called back into action, and Jack found himself reposted with an increased rank of Sergeant. Over the next few years, he remained based in England and seemed to take on more of a training role, transferring to the Middlesex Regiment and, by the end of 1917, attaining the rank of Colour Sergeant.

At some point Jack met Ethel May Smith, who lived in Frome, Somerset. She was the same age as Jack, and was the daughter of the foreman of one of the cloth manufacturers in the town – she also went on to work in the factory. The couple married in St John’s Church in the town on 1st June 1916, but did not go on to have any children.

Colour Sergeant Paulin’s military career was free of any medical issues or hospital admissions until February 1919. He had not been demobbed by this point, even though the war was over. However, as with many other servicemen at the time, Jack fell ill with influenza, and was admitted to Grove Military Hospital (now St George’s Hospital) in Tooting, South London. Pneumonia set in, and Jack passed away on 12th February 1919, at the age of 34 years old.

William Osborne is sadly one of those names that seems destined to be lost to time.

The starting point for any research is always going to be the gravestone; this is situated in the Woodlands Cemetery in Gillingham, Kent and confirms his service number, rank and regiment and the date of his death.

The service number helps confirm his first name, and that his widow was called Eliza, but without his age and confirmation of when he was married, there are too many potential Williams and Elizas/Elizabeths to confirm a definite identity.

The only thing that can be confirmed, therefore, is that William enlisted in the Middlesex Regiment at some point before April 1918, and subsequently transferred across to the Labour Corps. He passed away on 8th November 1918 at the Second Eastern General Hospital in Brighton, Sussex, having contracted pneumonia.

William Osborne lies at rest in that Gillingham Cemetery, not far from where his widow was living.

Harold Blake Hatcher was born on 11th February 1895, one of nine children to Robert Hatcher and his wife Ellen. Robert was a draper, and brought his family up in his home town of Taunton in Somerset. At least one of his children followed him into the cloth business, and, after he died in 1908, this seems to have fallen to Harold’s older brothers, Arthur and Ernest.

After leaving school, Harold became a dental student. Initially studying with Kendrick’s in his home town, he was about to begin training at Guy’s Hospital in London when war broke out.

Harold joined up in May 1915, and was initially assigned as a Lance Corporal to the 6th Battalion of the Somerset Light Infantry, before being transferred to the Middlesex Regiment.

In November 1917, he was badly injured in while fighting at Bourlon Woods, as part of the Battle of Cambrai. It was while he was recuperating that he transferred again, this time to the fledgling Royal Air Force.

Second Lieutenant Hatcher gained his wings in June 1918, and soon became a flying instructor. It was while he was working at RAF Fairlop in North West London, that an incident occurred. A local newspaper picked up the story.

Many in Taunton have learnt with sincere regret of the accidental death whilst flying of Lieutenant Harold Blake Hatcher of the Royal Air Force, third son of the late Mr Robert Hatcher of Taunton, and of Mrs Hatcher, now of Bristol.

The accident in which he met his death on Monday was a triple fatality, two other airmen being killed at the same time, Second Lieutenant Laurie Bell, of Bournemouth, and Flight Sergeant AR Bean, of Burslem.

At the inquest… it was stated in evidence that while Lieutenant Hatcher and Sergeant Bean were flying at a height of about 500ft, Second Lieutenant Bell, who w flying a single-seater, dived from a position some 700 feet higher, his machine striking and cutting clean through the double-seater, which folded its wings, hovered a few second, and then crashed to the earth. The three men were instantaneously killed.

A verdict of Accidental Death was returned.

Further witness testimony described how the Sopwith Camel, piloted by Bell, cutting the AVRO airplane it in two. Hatcher fell out of the wrecked two-seater as the Camel’s wings slowly folded into a V and fluttered free following the fuselage to the ground. All three airmen lost their lives. Bean was found in a sitting position, still strapped in the front half of the AVRO’s fuselage, his instructor’s body was found unmarked thirty yards away in the grass where it had fallen. The wingless Camel crashed close by and Bell was found to have almost every bone in his body broken.

There are some people whose stories just don’t want to be unearthed. It’s rare, but occasionally the brick walls come up and you just can’t find a crack through them.

Private A Lewis seems to be one of those people.

The gravestone is in Woodlands Cemetery in Gillingham, Kent. The inscription reads:

Military records for the service number are scarce, which is not unusual, but unearth two things. Private Lewis’ first name was Alfred, and he was married to a woman called Amelia.

Further research leads to his wife’s full maiden name, Amelia Florence May Courtney, and that she was the daughter of a draper’s assistant, born in London. The couple married in December 1909.

Frustratingly at this point, the trail goes cold. There is a record for an Alfred and Millie Lewis living in Gillingham in the 1911 census, but I am not convinced that they are the same couple.

Alfred Lewis is too common a name to be able to pinpoint any life before his marriage with any certainty, particularly as their marriage record does not give his parents’ names.

All I can say is that Alfred Lewis enlisted in the Middlesex Regiment, although there is no confirmation of when he enrolled. He gained both the Victory and British Medals, but there is nothing to confirm whether he service abroad or part of a territorial force.

Alfred was admitted to the War Hospital in Whitchurch, which was a psychiatric hospital to the north of Cardiff. He was recorded as suffering from paralysis, though whether this was the result of a physical or mental trauma is not clear.

Sadly, Private Lewis passed away on 11th April 1919; his age is unknown. He lies at rest in the Woodlands Cemetery in Gillingham.